Warped Tour provided a platform for many bands to share their music with the world and establish themselves as artists, but it was also a place for sexual predators and band members who were accused of sexual assault, grooming and harassment to reside in. The consistent allegations over the final years of Warped is what made artists not want to participate in the tour at all. But now, these bands are being “called out” by Warped Tour founder, Kevin Lyman for not being willing to break out of their “little” community. Is their dismissal of Warped Tour due to an elitist attitude or, do they simply not want to associate with a toxic community?

Recently, Lyman sat down with Kerrang! for their “Inside Track” podcast to discuss the downfall of Warped Tour. (Find the interview here)  The podcast heard from Lyman himself and other bands associated with the tour. In the interview, Lyman claims that a big part of the destruction of the tour was the musicians themselves and their dismissal of other bands on the tour. “I started watching this community tear itself apart from within. That this band would—not even meeting these people, they just didn’t agree with their music or the way they looked—bashing that band online.” The scene that Warped Tour promoted was one of togetherness; it was a place where music lovers could come together and feel at home. So, for Lyman, when bands would refuse to associate with one another, he believed it ultimately led to the breakdown of the scene and the tour.

“The bands I thought would have been fantastic for this were bands like Balance And Composure, La Dispute, Touché Amoré, I love those bands. I think they’re great musical bands. But their little attitudes of their little community; they don’t want to break out of that little community.” Lyman’s comments on these bands have sparked conversations on social media on whether it is a case of the band’s sense of superiority, or if Warped Tour was simply not the place for them. Twitter user, Tyler Sharp  (@TylerMEB), shared pieces from Lyman’s interview that led to a disagreement over whether or not bands like Balance and Composure and Touche Amore were simply “elitist” for not wanting to participate in the tour. His tweet caught the attention of Jeremy Bolm, lead vocalist of Touche Amore, remarked that Lyman’s comments “solidified the many reasons we chose to avoid it altogether,” in reference to the tour. Although it isn’t clear what Touche Amore’s reasoning really was for not being a part of the tour, it can be inferred that the brash comments from Lyman could be why. Balance and Composure’s lead vocalist, Jon Simmons, also vocalized his distaste for the comments made by Kevin Lyman. “Don’t you think calling us “little” three times in a statement is more elitist? I didn’t start making music for Kevin Lyman to save my career with Warped Tour. Maybe we just like to tour with bands we like??” Other bands are also speaking up in support of these artists and their decision to avoid the tour altogether. PUP, who chose to not return to Warped Tour after touring in 2015, has previously vocalized their resentment of the tour and went so far as to write “If this Tour Doesn’t Kill You” about their Warped experience. So it didn’t come as a surprise that they would be hostile to Lyman’s interview. 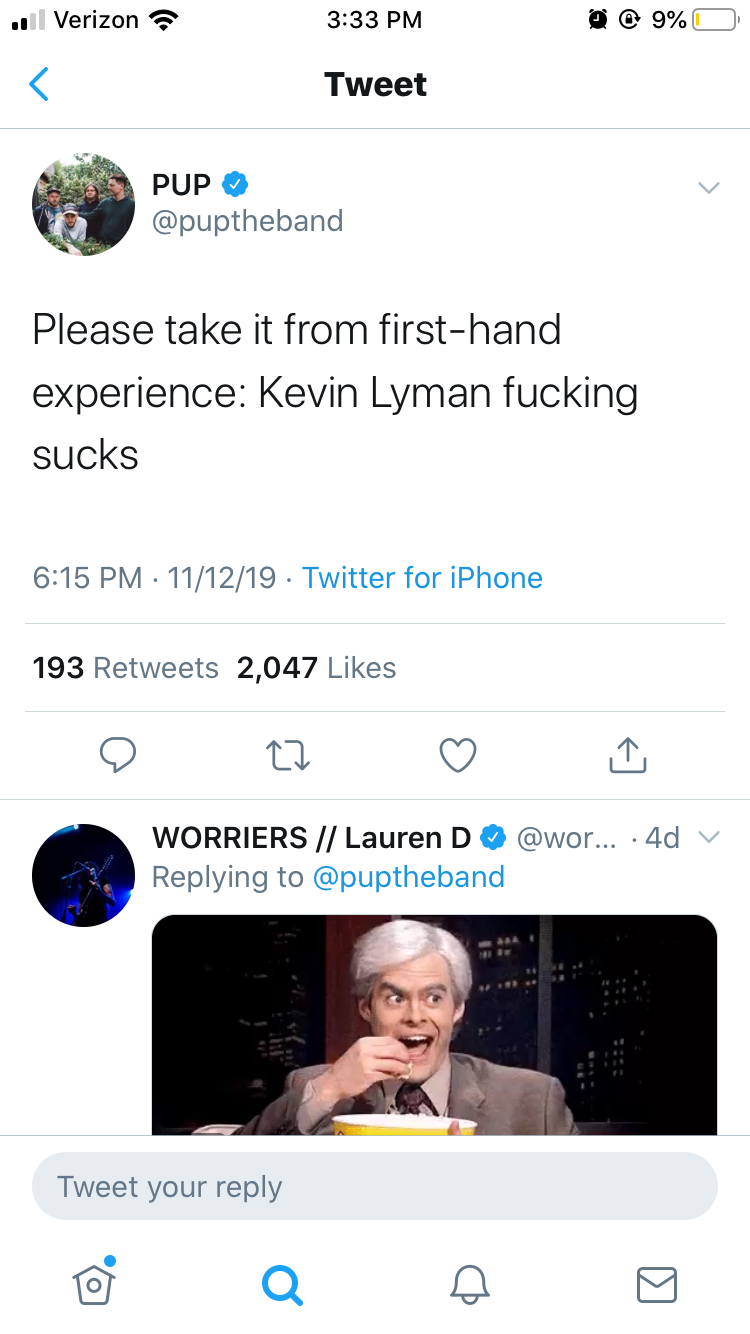 But why exactly do these artists oppose Warped Tour? Warped Tour has been the stomping grounds for pop-punk, metal and hardcore fans, young and old. As someone who attended Warped twice in her life, I can say that there was a sense of community that the tour promoted, and there was an increase in promoting a safe scene. There were booths dedicated to helping those with depression, anxiety or had faced past traumas such as sexual assault and bullying, which demonstrated Warped Tour’s push to make concert-going safer. But, there was a side to the tour that fans were not exposed to that hurt the image that Warped Tour tried to perceive. Multiple artists within the last few years were involved with allegations of a sexual nature. From the infamous Front Porch Step incident in 2014, where even after allegations of Jake McElfresh sending explicit images to underage fans came to light, he was still allowed to perform on the tour until he dropped out for counseling, to Lostprophet’s lead vocalist, Ian Watkins was sentenced to 29 years in prison on multiple offences of sexual assault. Blood on the Dancefloor’s Dahvie Vanity has also had multiple accusations of sexual assault against him, just to name a few of the accused who ran rampant at Warped Tour.  Although the allegations may not have come to light until after Warped Tour, it still shares the realities of a scene that allowed predators a platform.

Kevin Lyman built an empire for bands to push their career forward, if they chose to. Bands should not be dismissed because they did not want to participate in a tour that they did not believe in. Although Warped Tour has done excellent things for the scene, it is not the end all-be all of punk music. Whether these bands chose to avoid Warped Tour for the toxicity it emitted or simply because it wasn’t their style, their reasoning is valid. Many excellent bands established themselves on Warped such as My Chemical Romance, Blink-182 and Paramore, but bands like Balance and Composure, La Dispute and Touche Amore have built their own communities and thrived in them, and they shouldn’t be ashamed for not taking part in something they didn’t want to be a part of.